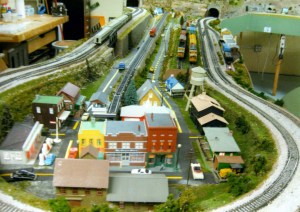 Riderwood Railroaders is a community group that is constructing and operating an ever-expanding HO scale model railroad layout, not only for its own pleasure, but for demonstrating to fellow residents and visitors at open houses and other special events.  Members carry out projects of planning, design, and construction to promote the art of model railroading. New members are always welcome to share in the enjoyment of this fascinating hobby. No experience necessary. If your interests run in the direction of carpentry, painting, wiring electronics, model building, scenery construction,  operating or just like to watch the trains move and blow the whistles, come and join the railroaders.

Miniature railroads, model railroads or toy trains, regardless of what you call them,  have been a hobby with the young and old, mostly boys and men, but not exclusively so, for over 100 years.  We would guess that most male residents of Riderwood had a Lionel or American Flyer train set around the Christmas tree or otherwise in their home, sometime when they were young. 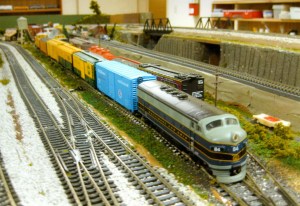 The Riderwood Railroad is a double track loop HO layout that circles 2 small villages. The layout is being enlarged with a third peninsula so that the current “U” shape of the layout will more resemble an “E” with this addition.   Take a ride on the Riderwood Doodlebug.

A short history of the group and plans for the near future are available in a 3 page Handout from August, 2016.  An addition in 2013 was a companion 4×8 foot table with examples of 5 different scales of model trains that cover the major scales that most modelers use.  See the different scales in this video.

Also in 2013 we converted the railroad from analog DC power to a DCC (Digital Command Control) system. This greatly expands the flexibility of running multiple trains at one time on the same track. DCC runs on a technology similar to that of the Internet. Each engine is controlled by a computer chip, and commands to each engine flows as packets of information through the rails.

During the summer of 2014 work began on an extension to the current railroad (called the town of Garden View). By the end of 2014 track was added to include a double-layer figure-8 design that is operational. It almost doubles the size of the existing railroad. Scenery on this section was completed in 2015.