The GVP Group challenges and works to change our society’s ever-increasing culture of violence through education, discussion, advocacy, and action.

Participants work together in Action Groups to bring change. The GVP Group cooperates with state and national gun violence prevention groups. All Riderwood residents are encouraged to join this group. GVP Group is a moderated email discussion group similar to Chatterwood.

Join the GVP Group by sending a blank email to GVP+subscribe@groups.io. To confirm your subscription, just reply as instructed in an email that you will receive. If the subscription procedure fails, seek help by email to GVP@riderwoodlife.com. Group leaders may also be contacted through this address.

Send messages to the GVP Group by email to GVP@groups.io

Action Groups
Action Groups are where the actual work is done. Anyone can join and work with the action groups that interest them. Join by choosing from the lists below and following the instructions given. The Action Groups are independently run by their members.

Here are groups involved in the gun violence prevention movement at the national, state, and local levels. Some of the groups sponsor events.

At 10 AM on the 14th of each month, there is a one-hour protest vigil at NRA Headquarters in Northern Virginia. Signs are provided, and there is easy street parking. Bring a folding chair if you desire. Bob Tiller will help arrange carpools from Riderwood.  His contact information is in the Riderwood Resident Directory, available online at MyErickson or on paper from your Front Desk.

Why is it on the 14th? The Sandy Hook Massacre was on December 14, 2012 (26 people were killed, including 20 children). The vigils have occurred every month since that tragedy. When the 14th is on a Sunday, the vigil begins at 2:00 PM. 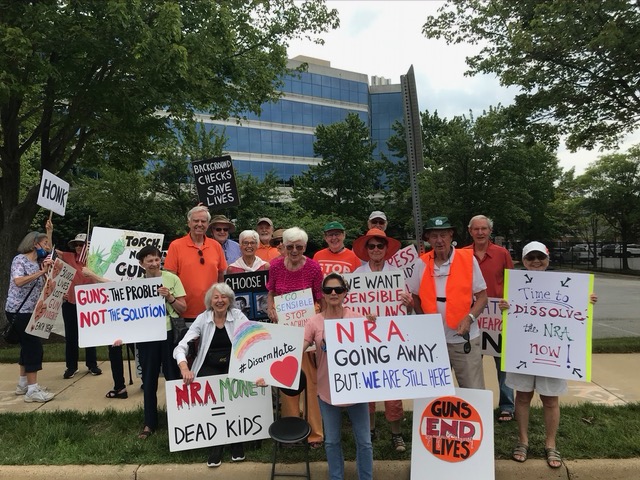 You can also contact your elected representatives with your opinions about gun violence prevention. Representatives in Montgomery County or Prince George’s County.

Everytown for Gun Safety (www.everytown.org) is an umbrella organization coordinating the activities of Moms Demand Action for Gun Sense in America and Mayors Against Illegal Guns.

Mayors Against Illegal Guns (mayors.everytown.org) is a coalition of over 1000 current and former mayors across the country who have joined together to prevent criminals from possessing guns illegally.

The mission of Marylanders to Prevent Gun Violence (mdpgv.org) is to reduce gun violence through policy development, empowerment through strategic education, and advocacy at the community and legislative levels. Our advocacy addresses gun violence in all forms,, from suicide, partner homicide, mass shootings, and daily shootings. We work with the Maryland legislature to draft, pass and implement gun violence solutions. We fight the corporate gun lobby and work to defeat dangerous legislation proposed by gun rights extremists. We use various tools to educate the public and legislature on gun violence prevention. Our website contains information on legislative activities.

November 16, 2022
Bethesda Beat of Bethesda Magazine
Yesterday on my drive into the newsroom I passed Trinity Lutheran Church in North Bethesda, where orange signs that said “Prayers AND Action” had been put in the yard. Orange is the color of the gun violence awareness movement. When I saw the signs, I wondered if they were put up in response to Sunday’s shooting at Clyde’s of Chevy Chase, which led to two men being hospitalized. Or, perhaps it was a response to a shooting in Silver Spring last week, where a 19-year-old Hyattsville resident was killed, and two others were hospitalized.

It could even have been in response to the tragedy a couple of hours south of us in Charlottesville, where I used to cover local news, where three University of Virginia football players were shot and killed, and two more were injured late Sunday night.

Our county, state and country have been no strangers to gun violence in recent days, weeks and months. These tragedies have impacted countless families, friends and community members. And some public officials are taking action.

Yesterday, the Montgomery County Council unanimously passed a bill that prohibits the possession of firearms within 100 yards of some public places throughout the county, including those with wear and carry permits issued by Maryland State Police.

According to the bill, the places of public assembly can include a park; place of worship; school; library; recreational facility; hospital, and other public spaces. It also includes government buildings or government-owned property, polling places, and other facilities. Law enforcement officers are exempted.

Council President Gabe Albornoz, who was the lead sponsor of the bill, said at the council meeting that while some may say more policy isn’t the answer, he believes this is what needs to happen to prevent more tragedies.

“Just in the last 24 hours, we learned three lives were taken senselessly [at the University of Virginia] … and there was a fight at Clyde’s that escalated in large part because somebody had a gun,” Albornoz said. “As the parent of four children, this is not the world I want my kids growing up in.”

As the state and county welcome new public officials in the coming weeks, community members will be watching to see what the people they elected plan to do about gun violence locally and nationally.
Ginny Bixby
Politics and Enterprise Reporter, Bethesda Beat